Sometimes when you’re working on a project, accidental images are created. Here’s one of them: 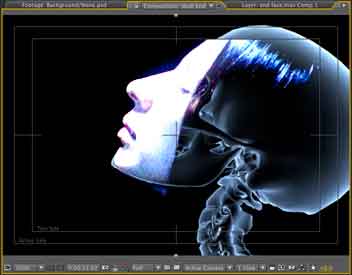 How did this happen? I had isolated the upper portion of Christina’s face so that I could do some motion tracking on it. I was trying to match the skull beneath to the face on top. This meant tracking her real face so I could make the skull match it. This is to compensate for not only her little moves while standing there in the shot, but the slight weave and warp of the film as it passed through the gate.

At one point I looked at the comp window and thought this would make a fine image on its own. Too bad it has nothing to do with the film.