The show is up at Negativland.com – go to the link below and listen! http://www.negativland.com/ote/?p=1837 It’s a three-hour “talk show” about the non-existance of God. I play Dr. Otto Prieswell, a supposed neuroscientist. There are some gags, but I pretty much played it straight, and about 90% of what I refer to is actually true. […]

I will be on Don Joyce’s “Over the Edge” radio show THIS WEEK, that is the evening of 12 January (Thursday). The show is on KPFA(www.kpfa.org) and it begins at midnight PST. I’ll be a neurosurgeon that night, so I may not have my own name. Tune in and, as usual, CALL IN the show! […]

I’m going to be on Don Joyce’s “Over the Edge” show tomorrow night – Thursday, 15 December, 2010 on KPFA radio, starting at midnight! Listen here! You may not recognize me, as we’ll probably be using code names – do you hear that? CODE NAMES. Tune in and listen if you’re a night owl. If […]

Hey, all you Los Angeles people, it’s a personal appearance from me. I’ll be onstage at this event. But don’t look at me – the real show happens with the Dewans and their one-of-a-kind hand-built synthesizer instruments! Ghettogloss presents: The Dewanatron Experiment at Spaceland Dewanatron will operate the brand-new Dual Primate Console at Spaceland in […] 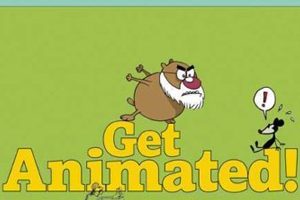 The “Get Animated!” book tour is about to launch. We’re traveling up the Pacific Coast to do a few events in major cities along the way. Is yours among them? Come visit and say hello! Invite me to your house! July 15th – 7:00 PM Ravenna Third Place Books – 17171 Bothell Way NE, Lake […] 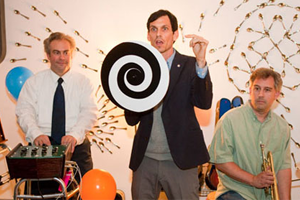 At the Dewanatron Show Sunday night. The generous Dewans and their equally gracious pals allowed me to join their festival of music, noise, and fun. Read about it here, at the L.A. Times page. That’s Brian Dewan on the left side, Rob Zabrecky in the middle, and your narrator on the right, attempting to fit […] 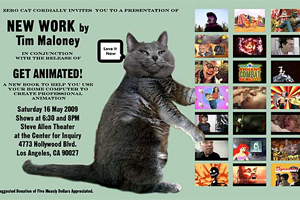 Click on the picture for a larger, more readable version. It’s true! I am working like a fiend in preparation for this event. Here is the information. Now you know what you must do. I will be there, attempting to look respectable as I try to make you buy something from my hideous table of […]