A new version of “Cat’s Head Theatre,” a.k.a. Cat Head Theatre 2, a.k.a. the Japanese Movie One, is now up on YouTube. Yes, the HD version will not be long behind, but for now why not enjoy a brand spanking new 360 version? 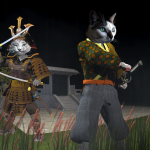 Re-imagined and re-engineered for this whole 360 degree video craze that’s sweeping the nation, CHT2 features a new approach to the material based on my own ramblings about cinema, VR, and the nature of spectatorship.  In short, it’s a flagship for some ideas I’ve been working on with respect to how newer technological forms affect content.

But who cares about that eggheady stuff? It’s got CATS, dammit. 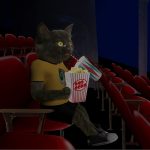 This version also features a guest appearance from Holden, the esteemed young cat found rubbing up against girlwithyellowspoon on occasion. As a young kitten, Holden used to frequent the run-down movie palaces of the city, ambling in for an afternoon matinee of art films and foreign fare, back in the days when such things were possible.  It is precisely on such a day that we find Holden, refreshments in hand, sitting down to enjoy a classic of the Japanese Cinema, “CAT’S HEAD THEATRE.”  Within moments he is transformed from the dingy movie house to the film itself, revealing in the sounds and textures of the world within the silver screen.