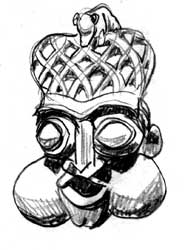 While we were in France, we visited some museums. This was also the perfect opportunity to fill the sketchbook with some other “people” we knew. This fellow normally lives at the Musée du Quai Branly. As does this bright charmer below. Some kind of Innuit figure, he looks like an enraged Manta Ray to me. 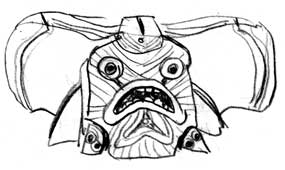 Later, we visited the Musée Fragonard, certainly the best kept secret museum and morbid treasure of Paris. Amongst the various curiosities in this palace of grotesquery, were these happy dancing dead babies: 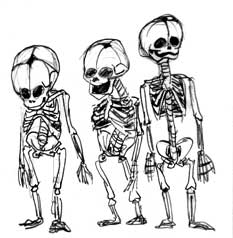 This last one was extremely disturbing; it seems to be the partial head of some kind of animal. The lower jaw has formed properly, but some sort of monstrous defect has prevented the head from growing at all – just a smooth, bulbous mass where the brain is thought to be. 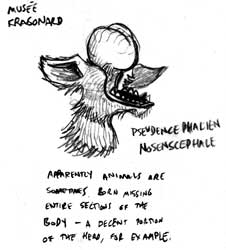 A visit to either of these fine institutions is strongly encouraged.

One thought on “Everyone We Know 4 – Paris”