For an explanation of how these work, see the original post.

This one is also NSFW for tiny cartoon boobs.  Also a few lines which, when placed next to other lines that represent legs, indicate to the viewer the suggestion of a thatch of pubic hair, often missing from today’s traditional pornography, but here providing a less explicit indication of the genital area.  Our model is thus, clearly nude (a fact that some portion of the joke relies on), but could not possibly be called arousing, at least not to contemporary fanboys.

It joins this post as being one of two NSFW gesture comics that did not make it into the ashcan I sent around at SDCC. 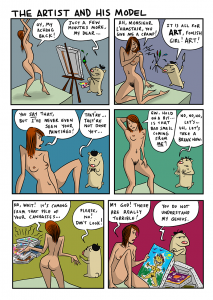