It seems that computer projects are never quite over.  I had always known that the render farm would need work forever.  For one, it sure does need a proper name.  What to call it?  What will be not only memorable but significant in regards to its origins?  TrashNet?  Junk Robo?  RemainderTron?

More importantly, when I based the farm on Mac OSX 10.9.5, I was already at least one iteration of the OS behind.  Now I’m two iterations – the current OSX is at 10.11.3.  Would the old 2006 MacPro 1,1 towers handle the latest and greatest OS?  The clever devils who work on such things indicated yes.  In fact, the popular boot.efi hack I’d been using for 10.9.5 was even more sophisticated than when I first dabbled with it.  There’s now a painless shell script that assembles a USB install key for you. 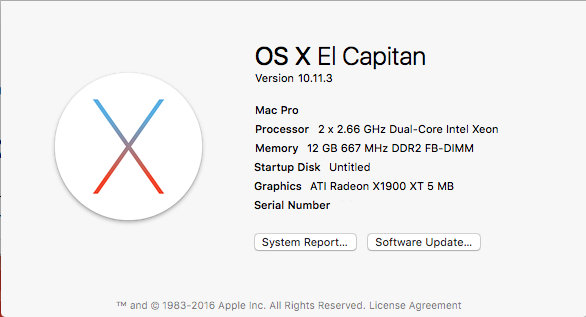 Here’s the “About this Mac” screen showing that this is the old 4-core model with the stock graphics card running 10.11.3 with no problem.  An experiment with Yosemite (10.10) actually yielded kind of crappy results.  When rebooted the Mac would experience crazy dropouts from the video card, as if this old beast was simply not going to handle the demands of the new OS.  My octocore experiment ran Yosemite fine, but it was also using a souped-up Radeon video card.  This result is quite good using the stock Radeon.

One issue I ran across on the fora that hosted this solution was that the hack was performing very poorly on machines that were fitted with 512Mb memory.  The solution seemed to be removing the 512 sticks and replacing them with 1 and 2Gb memory.  Fortunately eBay revealed a seller willing to part with 30Gb of 1 and 2Gb sticks, all for about $30.  I opened my own wallet again, knowing the school would never get their act together to buy these, and also dimly aware that our IT department which should have a box of these somewhere, does not bother keeping any old gear, even for experiments and fun and games.

The extra memory also meant that I could give each unit in the farm a whopping 12Gb of memory instead of the 10 they had previously.  Now all I need to do is create the new render node image and copy it to all systems.

One last vexing issue is that this entire farm is on a local network and is inaccessible from the outside.  It would be best if, instead of having to drive all the way to school to manually submit jobs, that I and the students could do so remotely.  As if there were a “watch” folder on the PDC, maybe some kind of Dropbox folder.  The PDC would have to be connected to the internet via Wifi (that unit has a Wifi card) and would need to direct network traffic outside the 10.0.0.x IP range to the outside world.  Would be great if it could also write the files to Dropbox via the same method.  If you’ve got a method, let me know what it is.