In which I destroy everything.

I installed a blank drive called  “Lucifer” (it matches JHVH-1 and keeps with my Christian eschatology theme) to be the common drive for scripts, logs, temp files, etc.  Now all slaves, including JHVH-1 itself, will have the same pathnames, namely /Volumes/Lucifer/.

Still struggling with Dr. Queue, I started from scratch.

KERNEL PANIC FAIL on JHVH-!  The whole shebang was somehow completely goofed up.  Holy cats, I destroyed it!  This does explain the weird sudo behavior I experienced last time.  I must have really borked up some important settings. 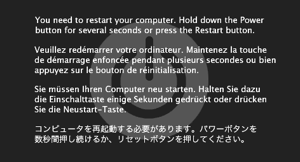 Ah well, start from scratch, and I really mean from scratch – from a  bare drive with nothing on it,

Luckily I could image the slave drive and start with that.

The issue now is how to get a front-end working.  So at this point I had most of the farm back, but without a proper front-end I’d either have to do everything by command-line (ugh) and write scripts I could safely debug, or get cracking on the front-ends.

If you’ll remember, the front-end is part of what I am trying to fix with Render Farm 2.0.  The old drqman front-end, running under X11, is fine for local use, and better than nothing.  But it could not be accessed remotely, and I could not check the status of anything while I was away.  This is not so great for a farm that is about 40 miles from my house.

Thus I went back to drqman.

Attempting to run drqman from the command-line gave me errors.  Drqman needs GTK2.  So, off to build GTK2.

Humming along,  the gtk2 build seems to have installed, but when drqman was run from the command-line it bombed out.  Some quick Googling revealed that gtk2 may have to be built with some flags turned on, namely for Universal binaries and for X-11, thus,

And this build went humming along, taking quite some time.

Once built, drqman accepted gtk2 just fine, but now asked for a dylib for libpng12.

But it still wants the library “libpng12.dylib.”  I’m pretty sure it would not want the one built for the PPC  Mac Mini.  Grrr.

It makes me want to use another front-end.