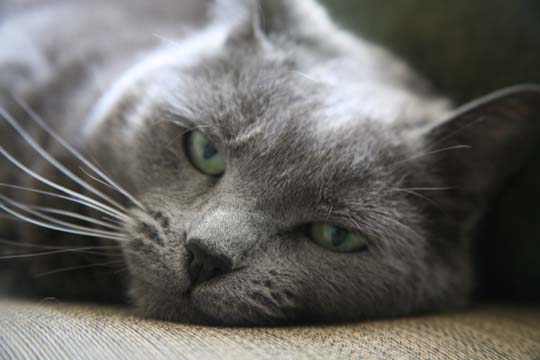 Today we said goodbye to our little grey muse.  Zero stumbled into our driveway the day after Christmas, scrawny, flea-ridden, with a kink in her tail and missing a tooth, yowling like a four-alarm fire.  She wolfed down a can of Purina’s finest in between yelps; I was certain she would not have lasted another day without some help.  At first we kept her in the garage, separated from the other two beasts, and only referred to her as “G.C.,” the Grey Cat.  We did not intend to keep her and looked around for a new home.  I would visit her several times a day with food, and after a few thousand head-butts I knew I wanted her around permanently.

There’s a  complicated but true story about her name – I was five years old and I concocted “Zero” as the perfect title for a cat that I did not have (and sometimes was if the other kindergarteners were playing “house”).  It took nearly 30 years to find a proper character worthy of the name.

A great mouser, a climber of trees, never a good lap cat, lover of gravy, destroyer of cat toys, ‘nip addict, cream face, the Bear of Bears, distant to humans except for a few and then greedy with their affections – a lot like her owner that way.  Chronic Kidney Disease got her in the end, though we kept her going for an unheard-of three years.  By the last we watched her waste away from her Falstavian proportions to a wisp of a kitten, the same one we found in our driveway.  Eighteen years is a long time, but it’s still an injustice that these frail bodies of ours wear out so soon.

She woke me this morning at 6AM, regrettably, so that she could wait patiently as I tried tiny dishes of foods she could handle.  About four or five attempts and I found the combination to make a last meal worthwhile.  Our first interactions were about feeding a starving beast, and now our last one would be too.

Zero joins Cinder as a former participant in The Simulation, now freed from it. She is survived by our remaining cat, Louise Brooks.