Jim Woodring, in his brilliant comic “Particular Mind,” drew the artist dreaming of struggling in a life drawing class. His pen scrawls on the paper, unable to capture the figure before him. Much to his amazement (and chagrin) the woman next to him is drawing the model as a comic strip. She is detailing he subject through space and time via a sequence of panels. This story profoundly affected me (as most of Jim’s work does), and when I became capable of it, I decided to try this method in my gesture drawing class. For those who may not know, gesture drawing emphasizes short poses so that the artist attempts to capture the sense and the general volume of the figure in a few lines, rather than concentrating on the details. It is good training for animation, in which simplicity and movement are good elements to master.

Thus, I began my interest in applying the short 3-minute (or less) poses into comics panels. Keep in mind that as I drew them I had no idea what the model would do next, so each panel is drawn – and written – one at a time. I had to try to make sense not only of the pose, but sometimes I added figures, dialogue and background. I was making it up as I went along; not the easiest task. Consequently, the resultant comics are uneven, though somewhat fun. These have been finished and colored. The originals are sloppy pencil, and not the easiest to read.

You’ll also see recurring easy-to-draw characters like that hamster and Fredd, adding to a weird kind of commedia del-arte feeling. You can even begin to identify when certain models were on the stand – they become recognizable characters as well.

As usual, click for a larger version.  A number of these have been collected in an ashcan called “May I Melt On?”  That I’m giving away if you see me in the next few weeks.  I’ll be at Comic-Con in San Diego handing them out.  Expect a PDF on this site at some point. 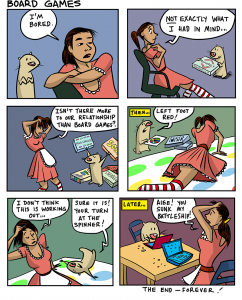 #midjourney prompt:”movie poster for ‘Epic of

Thank heavens. I had been using that Unhealthy So