Imaged four more machines. That means I’ve got five slaves. Each one needs a unique IP, and I have been manually assigning them.  I do not need to do this – Dr. Queue will see anything on the network.  But if I manually assign them and then add the names to the host file I can tell which is which.  And this is important since they are all headless.  I can use Screen Sharing to control the slaves, but only if I know which I’m accessing.

Furthermore, cloned drives in new bodies don’t always know who or what they are.  So I have to do some work.  Since they all think they are at 10.1.1.2 I have to keep the real “Gog” off the network, start up each new computer, access it with 10.1.1.2, change the names, then change the IP (which severs the connection with Screen Sharing), log back in to the new IP, and restart.

I could plug in the monitor and keyboard each, but that seems like more work. 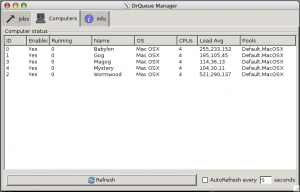 All are running okay!  I must give it all hard task of some kind. Currently we have 50Gb of RAM and 20 cores to work on some problem or other.  The Ethernet switch has enough room for two more slaves, so that will be 70Gb and 28 cores.  That should be enough firepower to get something done.

I could run that test After Fffects project again. Not now though, I want to monitor the job when it goes in. For now I’m going to leave everything running. I unplugged my fridge, so it it should not explode in my absence.  When I start drawing more power to make computations I wonder if I’ll blow a fuse.  It is all on a power strip, so that should prevent major damage…