These posts are going to get fewer and further between as I get this beast running and maintained.

I imaged “Whore” and set it up the exact same power strip.  So now I have a power strip with all seven machines plus an outlet containing the ethernet switch.

But when I shut everything down and powered it up again, the fuse on the power strip popped.  This is, of course, what I want everything to do should there be a sudden power shutdown – automatically startup, mount everything, and join the render pool again. So this is not good.

I unplugged two units and let them hang for now.  Here’s a screenshot showing five units ready to go.  So that’s 20 cores and 50Gb to apply to any task, plus two machines waiting and a spare if any of them go down. 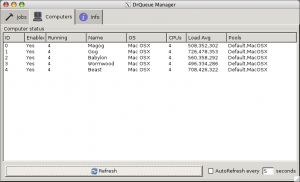 Apparently my office shares a 15 amp circuit with the one next door PLUS it seems to be sharing an additional 15 amp circuit on the other side.  I say this because the opposite end of this tiny room seems to be supporting the PDC, an additional monitor, my office iMac, the old DIY Cintiq build, plus a microwave (850W).  So I seem to have enough power if I can swing it right.  No way the microwave can be used if I plug the additional two machines in.  I am contemplating dragging an orange extension cable through the drop ceiling to Bob’s office and drawing the last 500W for the additional two machines from there.

If I had the use of the proper CSUF network I would not worry.  I could set up machine in far-flung rooms at the University and they would all find each other and rendering could happen much faster, probably.  But I am a renegade farm, operating in secret and on my own closed network, so I cannot do such things.

So far I’ve kept things stable at 5 units instead of 7, mostly because 7 units draws so much power on startup that it blows the fuse on the power strip.  Careful analysis shows that each Mac Pro draws about 250W at high use.  This means I can only really get 6 of them on a standard 15 amp circuit before I pop something.

It was time to run some tests. 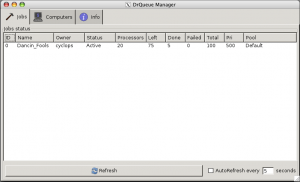 Here’s an early screenshot showing an After Effects project (from a class exercise) going through just fine.  There were a few things to learn about After Effects and Dr. Queue, though:

These are not major by any means.  If I write them down (as I did here) I will have a handy reference for when I submit AEFX jobs.