DISCLAIMER: This is a continuing series detailing the painful story of a DIY render farm build.  It is terribly technical and
somewhat frustrating.  Those who are unprepared for such “entertainment” are advised to ignore these posts.

Lest these posts become a festival of fails, I’d like to provide at least a little counter with a success or two.

I did manage to write a custom job script for Mandelbulber and Dr. Queue.  It had a few bugs, but went through fine.  Mandelbulber runs several instances, one per core, which means 8 on the PDC JHVH-1 machine and 4 on Wormwood, the only node connected thus far.  Each frame was a proper 4K (4096 x 2160 DCI compliant) render.  It took a few hours, but the first 100 frames came through fine.

Imported into DaVinci and made into a 1080 proxy the whole thing worked fine and demonstrates that 4K cinema sized 3D fractals are only a button push away. 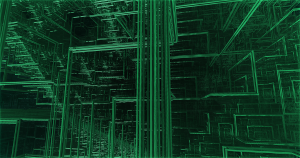 If I can confirm the AEFX render and the Luxrender capability I’l be very happy to run the whole farm like that as long as the electricity holds out.  I may just run a few thousand frames of this beast for a while as it is so I can get something happening.

Got a letter from #midjourney today with an unusua

Another #nightmarefilm suggested by #midjourney.

Almost Brian Dewan clouds today. He can paint the